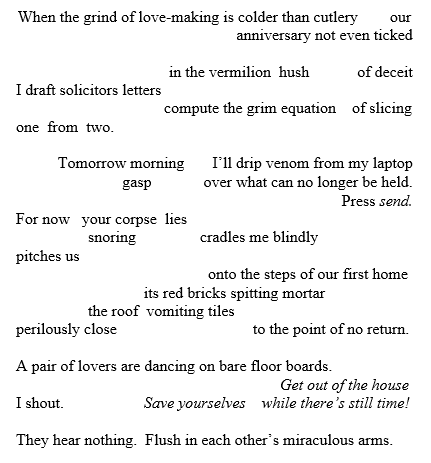 Commended in The Poetry Society's 2019 Stanza Poetry Competition on the theme of 'Lies', judged by Geraldine Clarkson.

Claire Booker is a Brighton-based poet and playwright. Her debut pamphlet Later There Will Be Postcards is out with Green Bottle Press. Her poems have appeared widely, including in Ambit, Magma, the Morning Star, the North, Rialto, the Spectator and on the side of a Guernsey bus. She has been a Poetry Society Members' Poem winner three times in Poetry News, a winner of Poems on the Move 2018, and a recipient of a Kathak International Literary Award 2019. Her poem 'Refuge' was recently set to music by classical composer Nicola Burnett Smith and performed at the Actor's Church, Covent Garden. Claire travelled to Bangladesh as a guest poet at Dhaka's International Writers Festival 2019 and has been feature poet at many poetry events in the UK. In December 2019, her poems will be read simultaneously at six venues as part of Arachne Press' Solstice Shorts Festival. Her stage plays have been performed in Europe, Australia, America and the UK. Claire blogs at www.bookerplays.co.uk