First, Jude gave Jutta an enormous book of photographs of water: the ideal gift for the one you hate most. Ponderous, abstract, impossible to argue with, weighing more than she did. Jude dropped it triumphantly on her sister’s lap with a shout, nearly breaking her legs.

Next, Jutta gave Jude a pair of seamless fluorescent pink suede boots that reached nearly to her pelvis and could neither be walked in nor exposed to the air. Later, Jude presented Jutta with an eighteenth-century embossed tin containing a written record of Jude’s physical measurements, of which Jutta had always been jealous. Jutta’s eyes widened then darkened as she unfurled the tiny scroll.

Five years into their dubious project, the aunts are exhausted and sorrowing. A repentant Jutta gives Jude the story of their lives together, from infancy to adulthood, built out of marzipan and mounted on top of an enormous buttercream cake. There are detailed marzipan figures to represent each of the important people in Jude’s life. There are tiny reproductions of Jude’s happiest memories, such as the time she rejected a marriage proposal. There is even a reproduction of the rented beach house in which the aunts had stayed at the end of their last estrangement. (They had once not spoken for two years, for reasons they’d both secretly forgotten.) They lived for a month in that beach house, and when one needed to escape the other’s company, she would shower outside in the cedar enclosure, feign cramps, or take hours to dust a single room. 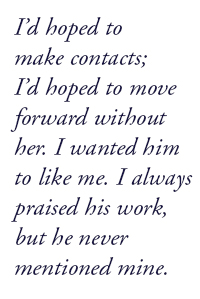 Otherwise, the aunts had filled the days with stunts. There was a marzipan replica of the afternoon they had climbed a power plant, and the night they had built a fire and fed it their phone bills and credit reports. But the marzipan scene that brought the aunts to reconciliation was built in the centre of the cake.

It was a near-flawless reconstruction of the next day, after the fire, when the aunts had felt rejuvenated and swam together in the orchard, in a giant trough that had been used for watering cattle. Black rubber and ugly, the rim of the trough was crusted with a delicate white filigree of dried cow saliva; it had never been properly cleaned. But for some reason it felt better than a river, lake, or ocean; the dark material absorbing the warmth of the sun, the water itself smelling faintly like licorice, the two sisters looking up at the apple trees over their heads, as fruit dropped occasionally into the water, and they murmured lazily to each other about the seafood restaurant they would open someday. Jointly they would buy up a swath of the coast. There would be roasted parsnip soup and there would be lobsters worked into nearly every dish. One aunt was in favour of driving scissors into each lobster’s neck to kill it before it was dropped into boiling water, the other aunt was not. It didn’t matter. Neither process would change the character of the meat.

This poem was published in The Poetry Review, spring issue, 2019.